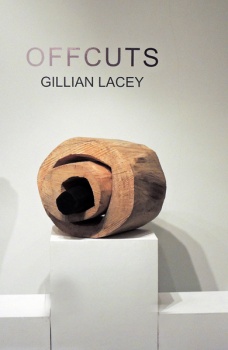 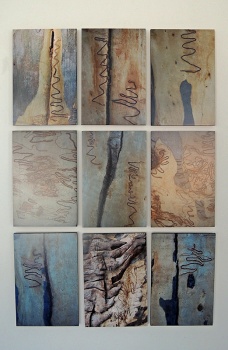 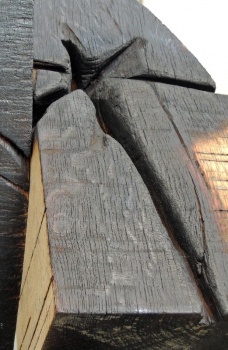 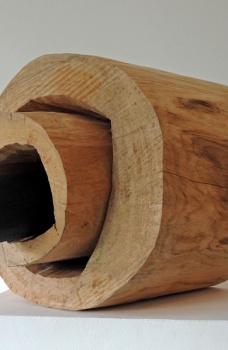 THIS EXHIBITION HAS NOW CLOSED. PLEASE CONTACT THE GALLERY IF YOU ARE INTERESTED IN A PARTICULAR ARTWORK BY THIS ARTIST
October. A debut solo exhibition of sculpture and photography exploring the beauty of wood. Expect to be confronted with bold, semi-charred sculptures and installations, and intriguing photographic prints which capture the intricate textures of wood bark.

The exhibition is open on Saturdays 11am-4pm for the duration, and weekdays by arrangement.

Gillian Lacey has enjoyed a career as a filmmaker and film lecturer, teaching for many years at the National Film and Television School. In the last three years she has changed direction and the result is this exhibition.

Gillian is a frequent visitor to Australia and from her first visit in 1986 she was attracted by the Gum Tree, of which there are over 600 varieties. Some shed bark in long strips, hanging like veils from the branches. In others insect boring tracks create beautiful patterns. Peeling bark reveals bright new bark beneath, changing with the light and season. Burnt stumps and sometimes whole forests of charred trees pepper the landscape in varying stages of rejuvenation after fires.

Gillian began taking photographs of bark (many of which are included in this exhibition), and four years ago this practice evolved to become a more expansive project, including sculpture and sculptural installations.

Back in England Gillian began exploring worn wood, salted wood, and sea-smoothed wood, creating her first sculptural installations for her garden in East Sussex. It was around this time that she came across Alan Smith (a Kew trained tree surgeon) at The Sculptors' Yard, together with a great pile of wood-offcuts discarded by sculptors who had been working at the Yard.

Amongst the discarded offcuts she discovered some interesting shapes and textures, and on her second visit to the Yard she saw Alan attacking a piece of wood with a blowtorch. Unable to resist his suggestion to 'have a go' Gillian found that she responded immediately to the process of charring and began visiting the Yard on a regular basis to seek out interesting offcuts and to use the blowtorch.

Ready to take the next step she visited Tony Tuke (an old friend) at his joinery workshop in Shropshire where she experimented with planing, sanding and polishing - by now having succumbed to buying her own sander and a couple of blowtorches.

With each Offcut Gillian makes a decision about what to retain and what to develop, using both the natural grain of the wood and any chainsaw marks inflicted during the cutting of it. So the wood is both natural and changed by human hand. Sanding accentuates the patterns of the chain saw and grain. Polishing, varnishing and charring contribute additional elements of interference, contrast, depth and texture.

Gillian's Offcuts continue to change and evolve; outside there may be rot and fungus, or cracks and gaps may appear. It is this unpredictability and impermanence that Gillian embraces - the slow breaking down; no piece is fixed or static.

With her photographs Gillian is primarily interested in the colours found in bark, often working in small series where she can juxtapose several photos around a theme. She prints on paper which is textured and which absorbs ink, giving a soft and abstract quality. There is no digital manipulation of any kind.

Most recently Gillian has begun to experiment with combining wood and photography; as with 'Condemned' - presently her only combined work. A blackened section of wood contains within it four spaces showing photos of yellow crosses - the crosses which marked it out for felling after a fire had rendered it unstable.
Gillian Lacey worked as an animator for many years having started on Yellow Submarine in 1968. In the late 70's she set up Leeds Animation to make educational and campaigning films.

For 12 years she headed the Animation Direction Masters course at the NFTS (National Film & Television School), whilst continuing to make her own documentary films with digital manipulation.
Gillian Lacey
Offcuts Exhibition
Photograph