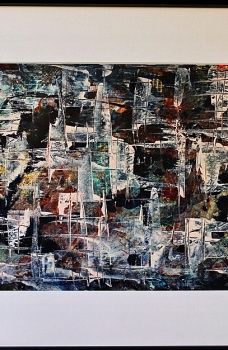 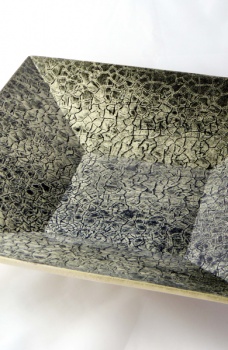 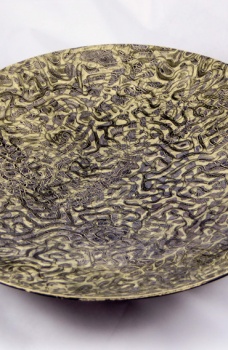 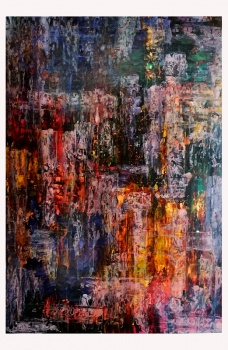 THIS EXHIBITION HAS NOW CLOSED, HOWEVER IF YOU'RE INTERESTED IN A PARTICULAR ARTWORK, PLEASE GET IN TOUCH.

This exhibition represents a break from our exclusive focus on three-dimensional art, pairing abstract paintings by East Anglian artist, Tracey Shayer with the latest firings by London ceramicist, David Gee.

Tracey Shayer is a self-taught artist who took up painting in 2014. She is exhibiting works in ink, oil and acrylic, demonstrating her love of colour, texture and layering - themes which are also integral to David Gee's meticulously-crafted ceramics, which act as a 'canvas' for his innovative textures and glazes.

David has produced some exciting new shapes and surface treatments for this exhibition. Being exhibited for the first time are a selection of square plates, completed in February 2017, alongside his latest lidded boxes and cannisters which he began to develop at the end of 2016. Also being exhibited are a variety of circular plates and shallow bowls dating from his recent back-catalogue to new firings.

David finds inspiration in the patterns and movement found in nature, as well as everyday surfaces, which he then preserves by compression after the application of oxides and underglazes. The result is a rich body of work which conveys depth, character and the hand of experience.

David Gee trained as a potter at the Camberwell School of Art and Design in the 1970s during what has become known as the School's golden age for ceramics. The ceramics course at Camberwell was established by some of Britain 's leading potters such as Colin Pearson, Lucie Rie and Hans Coper. He completed his training at Goldsmiths, University of London.

Tracey Shayer is an exciting new-comer to the art scene, having recently moved to Frinton-on-Sea from Hertfordshire. Her paintings convey feelings rather than fixed concepts and usually start with a colour. She paints using knives - finding brushes too confining - and is concerned with layers, often over-painting her paintings, creating a sense of depth and hidden meaning or intrigue.

This is Tracey's third exhibition, following on from her succesful show in London last October. She is exhibiting a range of work spanning her first 3 years as a painter, including several works completed in the last 4 months, not previously exhibited.

Please note: Only a selection of artworks in this exhibition are available to view online. Please visit the gallery to see the full exhibition.
Tracey Shayer
'Section'
Ink on paper
Price: £900