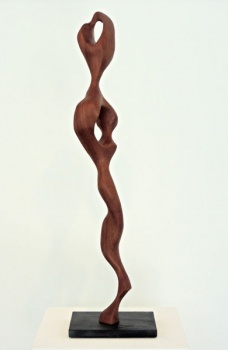 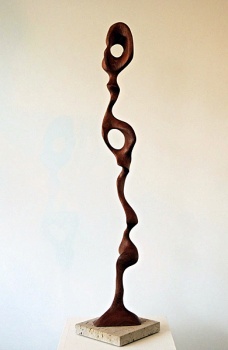 American-born Dennis Mannina created his first carved wooden sculptures in the early 1970s whilst practicing as an architect under the world-renowned Mies van der Rohe. In 1973 he moved to London and continued sculpting throughout his illustrious career as an architect, but it wasn't until 2012 that he first exhibited his work at Sculpt Gallery.

Mannina's abstract, organic sculptures are firmly in the US tradition of wood carving. Their fluid lines and polished surfaces twist and turn to form occasional loops and exploit the natural flaws in the wood - which since moving to the UK in 1991 are derived mainly from native British hard woods such as Brown Oak, Walnut and Laburnum.

Dennis Mannina was born in Chicago in 1944. He worked on many significant multi-million pound projects during his forty year career as an architect. Since his retirement he has been able to devote more time to developing his sculptural practice.
Dennis Mannina
'Boogie'
Mahogany
Price: £475