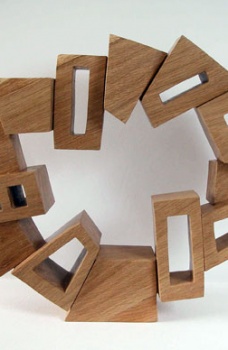 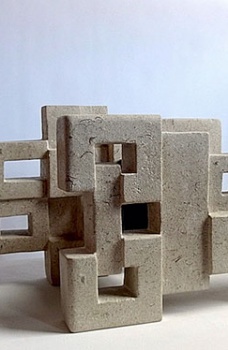 Malcolm Franklin studied Fine Art at the University of Wolverhampton (1990- 93), where he developed a love of stone carving, under the guidance of John Paddison. From there he moved to London to take an MA in Site- Specific sculpture at Wimbledon School of Art (1993-95).

Franklin's carved sculpture is non- representational, with shifts in planes, openings, holes, and passages which both occupy and displace space. The negative and positive spaces created are as integral to the finished work as the carved forms themselves, constantly changing and shifting depending on the light and angle, pushing the sculpture beyond its physical confines - something that the artist refers to as 'shifting space'.

Although Franklin's sculptures appear to have been constructed from separately carved pieces, they are in fact carved from a single block of stone or wood with no intended single viewpoint.

Franklin is also a celebrated printmaker and has work in many private and public collections, including the British Museum, London, Bibliotheca Alexandrina, Egypt, Split Graphic Biennial, Croatia, University of Wales Art Collection and in the Archive of the Royal Birmingham Society of Artists.

He is a member of the Royal Society of Sculptors (MRSS), the Royal Birmingham Society of Artists (RBSA) and was a trustee of the Free Painters and Sculptors Society from 2010-14.