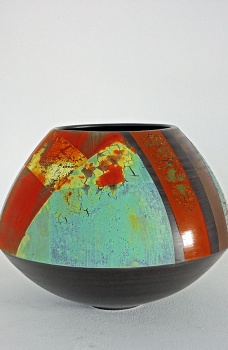 Tony Laverick is one of the UK's most celebrated contemporary ceramicists, having gained wide recognition for his dramatic pots which are decorated with rich layers of colour, often incorporating shimmering metallics and blocks of intricate texture. This, combined with his distinctively crisp, black forms, gives his work a luxuriously precious look and feel.

Each of Tony's pots conveys different qualities and characteristics depending on the angle from which they're viewed. Many appear to have a 'bold' and a 'quiet' side, generating a perpetual enjoyment of new discovery as the pots are rotated or newly positioned.

Tony is a professional member of the Craft Potters Association and enjoyed a major solo show of his work at the Contemporary Ceramics Centre, London, in 2014. He has been a professional ceramicist for more than 25 years, having studied and worked in the ceramics industry in Stoke on Trent. During that time he was also a designer for Coalport China, then part of the Wedgwood Group. His work is influenced not only by his broad background in ceramics but also by artists such as Kandinsky, Mondrian and Brancusi.

Tony has exhibited widely throughout the UK, Europe and Japan and his work is in many international museum collections, including: