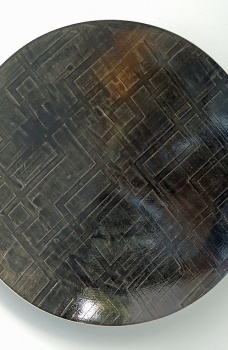 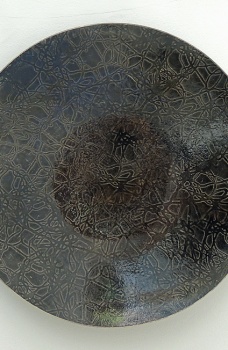 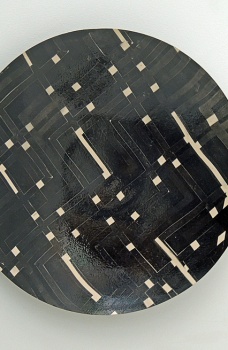 David Gee trained as a potter at the Camberwell School of Art and Design in the 1970s during what has become known as the School's golden age for ceramics. The ceramics course at Camberwell was established by some of Britain 's leading potters such as Colin Pearson, Lucie Rie and Hans Coper. David completed his training at Goldsmiths, University of London.

In addition to ceramics he studied printmaking (including lithography) at Camberwell, and was the first ceramics student there to attempt to combine the two disciplines by creating his own photo-litho transfers and applying them to his ceramics - a technique which he researched with the help of technicians from the Royal College of Art.

David uses grogged white earthenware to make his finely-crafted bowls, plates and pots. All of his plates can be wall hung via a pierced foot-ring. His surface treatments are inspired by an interest in patterns and movement found in the natural world; waves, vapour trails, sediments, erosion of rocks by water and wind, marble and rock formations. Other treatments are inspired by the textures of everyday surfaces and objects and how these can be preserved and transformed fossil-like by compression after the application of oxides and underglaze colours.

Unique surfaces are produced by a wide range of techniques including the impression of textures into the soft clay and infilling these with colours (similar to Japanese mishima decoration).

David spends a lot of time incubating his ideas which often only come together during the making process using processes which are time-consuming and complex. He says he has no desire to produce his work in large quantities or in trying to reproduce a pot, making each piece truly unique. He continues to experiment to find unusual methods to create unique surfaces.

David's work has recently been featured in an interior design magazine produced by Morris @ Co (William Morris) to complement their world-renowned textiles.